From a review of David Sandy’s appearance at the Magic Castle, April,  2013, by Nick Lewin.

The centerpiece of Sandy’s show was the “Blaney Levitation”, which most surely rates as one of the greatest illusions ever created. It is baffling and beautiful to watch and fools the eye and mind in an immaculate fashion.

During the taping of Lance Burtons segment in the Walter Blaney Bio video, Lance was asked his opinion of the Zaney Blaney Ladder Levitation. The video below was taped backstage at the Lance Burton Theatre in the Monte Carlo Hotel and Casino in Las Vegas. Camera credits.. Ryan Joyce, Timothy Drake 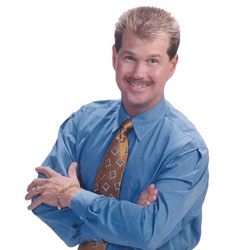 Over the years Walter Blaney performed his Ladder Levitation Illusion on numerous television shows including, The Tonight Show, Merv Griffin, The Diane Shore Show, To Tell The Truth, The Mike Douglas show and many others. Eventually Walter released the effect to other Magicians including Illusionist David Copperfield and Lance Burton among others.

Clips from a few of these television appearances were edited together by Timothy Drake into the video montage seen below. Enjoy!